The artists participating on this exhibition are also students of the Media faculty (Mediacampus/Dieburg) of the University of Applied Sciences in Darmstadt. 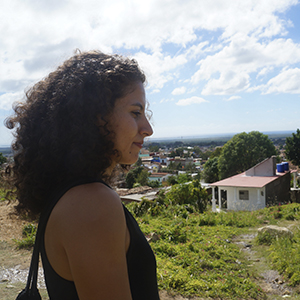 María José studied Audiovisual & Multimedia Communication in Costa Rica and she is currently a third semester student of the master program International Media Cultural Work (IMC) at the University of Applied Sciences of Darmstadt. Her areas of interest and are digital media- and storytelling as well as developing media projects for community participation. 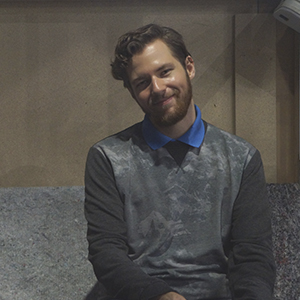 Max studied Animation and Game at the University Of Applied Sciences Darmstadt and he is also a third semester student of the IMC. His artistic interests include illustration and media production. “In my work I try to address the struggles that we face today and call for an appeal for change and dismantling that which atomizes us. Antifascist art is hard y’all”, he declares. 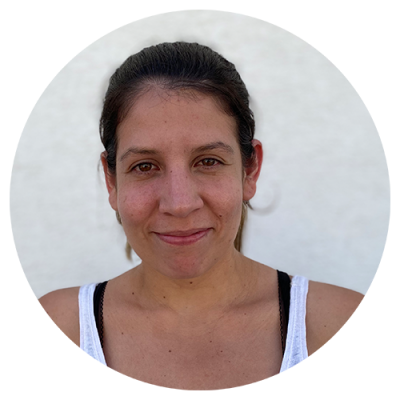 Natalia is a graduate in  Journalism & Visual Communication and, as the other members of her team, also going through the third semester of the IMC. She likes to define her interest on photography with Henri Cartier-Bresson’s quote that says: “To photograph: it is to put on the same line of sight the head, the eye and the heart.” 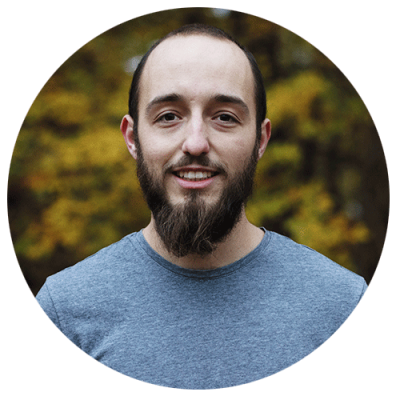 Marius is a bachelor student at Motion Pictures at the University Of Applied Sciences Darmstadt. His interest for filmmaking started after shooting a small video with a friend during tenth grade. “I especially like the visual part of filmmaking and therefore, I am mostly working as cameraman for short films”, explains Marius. Most recently he did the camera work for the short film “Bandsalat (The Purple Child).” 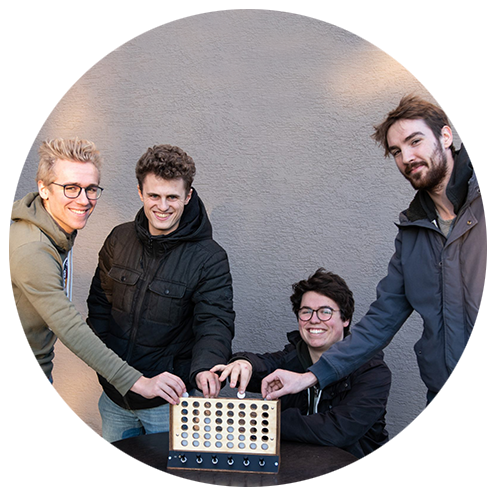 Philipp, Niklas, Matthias and Justin are four Sound and Music Production students at the University Of Applied Sciences Darmstadt. “SFX Toys is the dream we have. We had the task of developing and building a synthesizer for a project in class. But this product we developed has inspired us so much, that we want to get it out into the world and want to share it with everyone”, they explain. 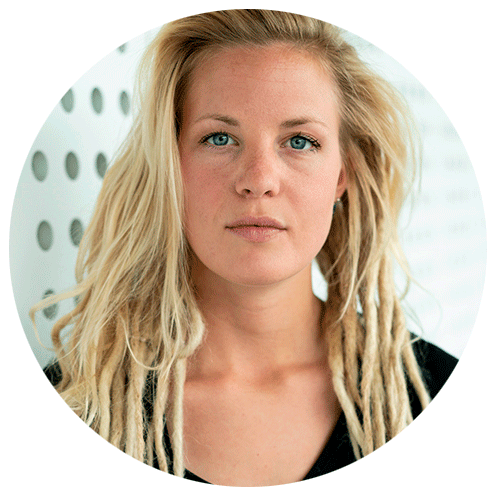 Anne Marie is currently a student of the master program Leadership in the Creative Industries (LCI). She is also a Jazz musician, sound designer and event technician for sound, light and video. Her main area of interest is theatre sound. She has done sound designs for the Hessisches Landestheater Marburg and the Staatstheater Darmstadt. She has already created audiovisual installation like MAD, a performance for the Dutch Dance Festival in Maastricht, 2019. “When I am not occupied by all kinds of sound and media, I need to spend my time outdoors and offline, away from screens. My abstract piece “It Might Be” is reflecting my attitude towards nowadays social media platforms and the effects on users behaviours”, says Anne Marie. 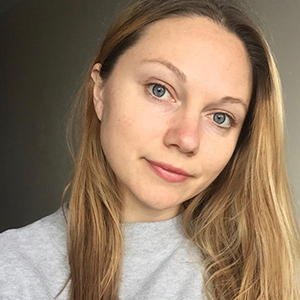 Gerdi studied Online Communication at the University Of Applied Sciences Darmstadt and she’s a graduate from the LCI master program at the same university. She and her project partner Noura affirm to strongly believe in the power of art for creating a unique way of communication and message delivery. “We started working on Dyslexia Learning (#LegasthenieLernen) during our master thesis. We are glad that with this exhibition we are able to reach a bigger audience and open up the topic to new people”, explains Gerdi. 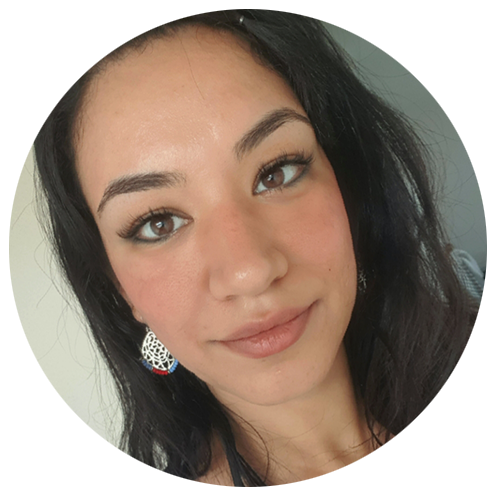 Noura studied Digital Media and is also a graduate student from LCI. She and Gerdi did a few projects during their studies where they experimented with unusual ways of communicating and campaigning. “We hope that #LegasthenieLernen will contribute to a better understanding and more tolerance towards Dyslexics”, she declares. 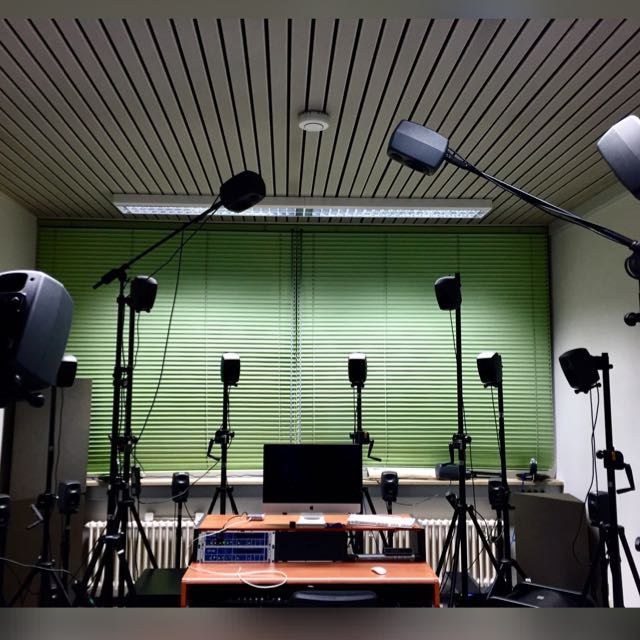 3D-Audio is an innovative technology as well as an artistic concept, by which sound appear in high plasticity and spaciality, so that it creates an intense impression of physical presence. Since 2012, the 3D-Audio-Lab at Darmstadt UAS contributes with its artistic and scientific positions und publications to the ongoing discourse about 3D Audio. The lab’s longterm link to the Fraunhofer Institute IDMT, the developer of SpatialSound Wave System (SSW), established a relation of critical feedback to the device’s software developments. It also cooperates closely in the area of Fulldome movies (360° films), which, too, is a focus of research at h_da.

The lab works is strongly related to the Master´s program International Media Cultural Work (IMC) involving students from all over the globe, giving them the opportunity to present their 3D audio related artworks and research results on international conferences, festivals and collaborate with e.g. Hessischer Rundfunk, Sony Music, Fulldome Festival, Hessentag, Planetarium Mannheim and ZKM Karlsruhe. 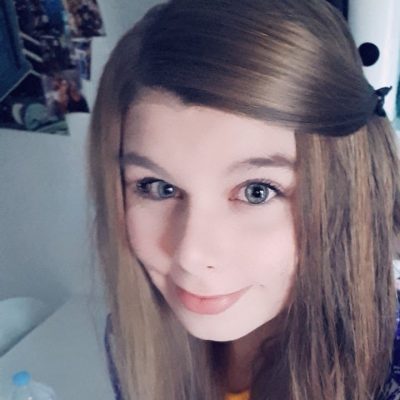 Carina defines herself as the Vision keeper, Animator and Character Artist of the project. She and her team are currently studying at the Animation and Game Bachelors’ program at the University Of Applied Sciences Darmstadt. “My team and I are very passionate artists that love bringing characters and a story to life”, explains Carina.

Marius is a technical Artist and works therefore on the effects of “Dissolve”.  He and the team have made this Animation in the 5th Semester of their studies at Animation and Game, which was already for some of them, their third animated project. 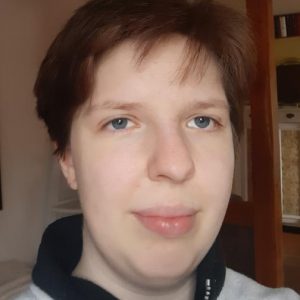 Emely is also a student from Animation and Game and she defines her role in the team also as Technical Artist and Animator. Emely and her team believe they have learned a lot while create all the shorts that Dissolve presents to the viewer. Their hopes are on one day being part of bigger productions and maybe even getting to the big screen. 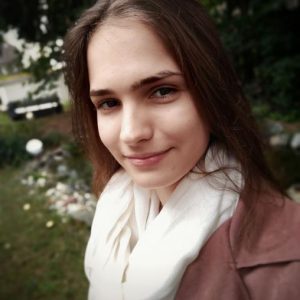 Jasmin, as all her team, also studies Animation and Game and her main role is as an Environment Artist and Production Owner. The aim of Dissolve is for their message to “get stuck” in the viewers’ head for them to connect to their characters. 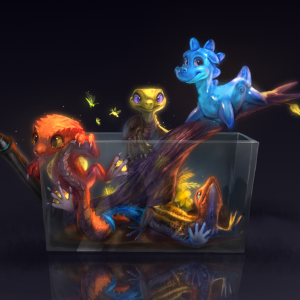 Dissolve also counts on the participation of a specialized Sound Production Team, which is formed by Dennis Tjiok, Christoph Manderscheid, and Janis Quintino.

Do You Read Me? 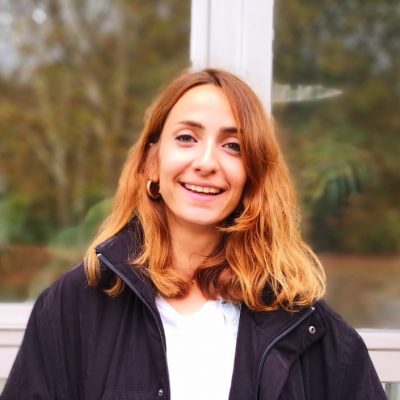 Sabine is a graduate student of the International Media Cultural Work Master program at the University Of Applied Sciences Darmstadt and her main field of interest is the work of sonic immersion and interaction. One Big Blur was her first collaborative audio-visual production, premiered at the Global Composition 2018 and featured in ZKM’s Next Generation Festival in 2019. In it, she uses recordings of soft-spoken words and organic material to uncover fascinating worlds rooted in human conditions such as vulnerabilities, inter-dependencies. Her master thesis work Evidence of Contact concentrates on emerging practices of care and solidarity empowering women and minority groups.

The Virtues of Normality 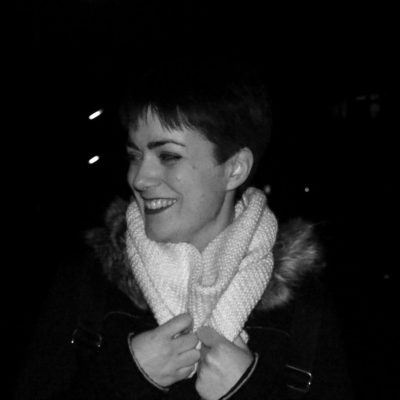 Alison defines herself as a half-English and half-French woman that grew up in Munich. With already more than 6 years in the film business, she has worked in both editorial and productional departments of television companies; worked on image films and teaching videos at the TUD. “I have always worked as a director and writer on personal projects, as well as on music videos and image films for clients”, explains Alison. 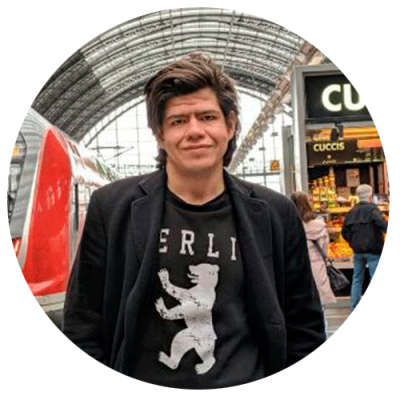 “Since I was a child I participated in all kinds of school art activities such as theater, dance, music and any kind of performing arts.”, explains Juan Carlos, graduate student of the IMC Master program.  He studied Communication Sciences in Mexico City, focusing on mass media such as radio, television, film, and photography. He has been part of different online radio programs -as producer or as guest- focused on culture and entertainment which deal with relevant social issues. “The master programme International Media Cultural Work, helped me to deepen my vision as a professional and to develop more my artistic side”, explains Juan Carlos. He quotes J. Beuys as the inspiration that backs up his art work: “Every human being is an artist and every action a work of art.” 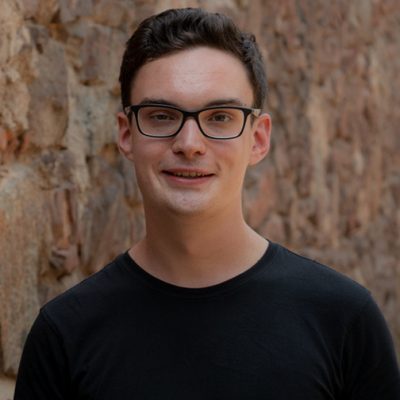 Joschua is the screenwriter and director of the theatre adaption of the project. He completed his Motion Pictures Bachelor with the graduation film “Pech und Schwefel”, which has been awarded the “Hessischer Filmpreis 2019″. In his Master’s studies at the Internationa Media Cultural Work he engages in the cooperation between theatre and film. Currently he is working on a web series and a short film funded by Hessian Film Fund.

Charlotte works on the production and postproduction of the project. She completed her Bachelor (Theatre- Film- and Mediastudies) with a thesis on children’s TV shows. She is currently studying in the Master program International Media Cultural Work in Darmstadt. During her Bachelor, she produced two short films, one stop-motion short film during her gap year, and she produced with Joschua Keßler for the web series pilot “Wir sind frei” in 2020.”

This project it is a cooperation of the Odenwaldklub e.V. with the Research Center for Digital Communication and Media Innovation (Forschungszentrum für Digitale Kommunikation und Medieninnovation- DKMI) of the University of Applied Sciences Darmstadt, Media Campus Dieburg. 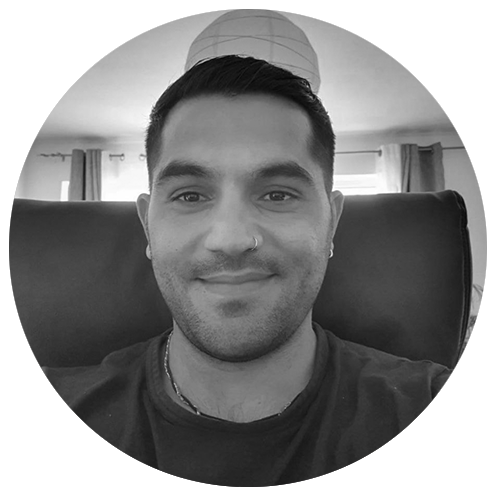 Marco is currently a student at the master program LCI and his role in Minesweeper in VR comprehends the fields of concept art, storyboarding, 3D model research- and environment design and environmental storytelling. 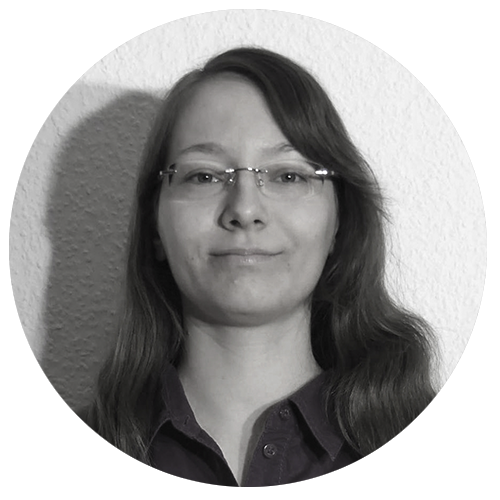 Simone, just like the rest of her team, is also an LCI student. She deals with the topics of project management, interaction design, game logic & flow, explosion & physics prototyping and user guidance & tutorials. 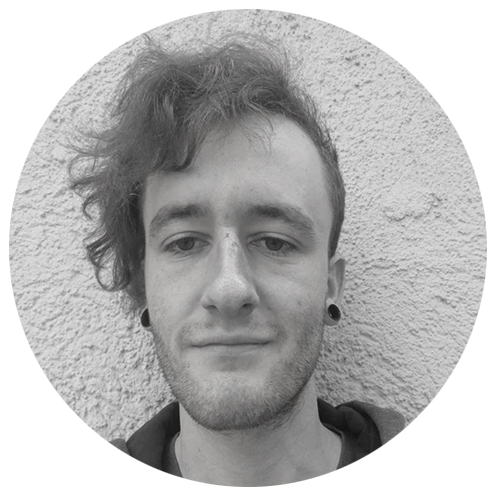 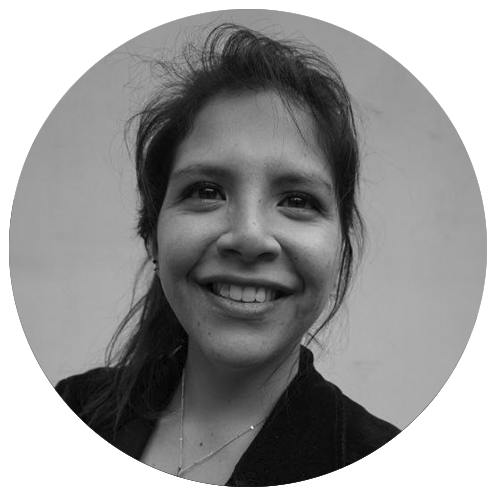 Diana’s role on the Minesweeper in VR project has to do with Historical research, immersion design, story- and dialogue writing and on the sound production side she takes care also of the sound effects, ambient sounds and voice recordings. 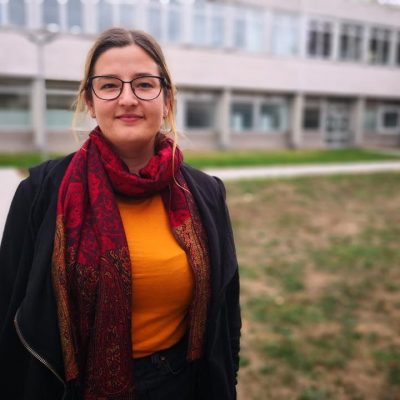 Xenia’s bachelor studies were focused on art, Music and Media: Organization and Communication. Nowadays she is a fourth semester student at the International Media Cultural Work Program and developed along her classmate and friend Gauri the project Liebe in Zeiten der Suprabürokratie (Love in times of super bureaucracy). The artwork is based on a short story by Xenia  from 2015 inspired by the first “refugee crisis” in Germany. It deals with the problems of Annika and Jakob, a couple with different origins and takes place in a dystopian world where robots, humanoids and bureaucracy rule. 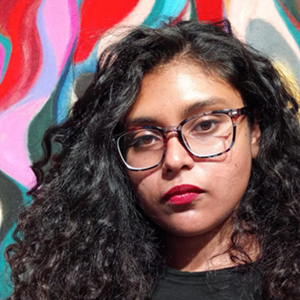 Gauri is also an IMC student and her bachelor studies were focused on Journalism and Mass Communication. Initially both artists were thinking of doing an installation with homage to “Trash Jesus” (2019), the first time they worked together. “However due to COVID 19, we developed the idea – while being on two different continents – into what the audience are going to experience here”, explains Gauri about the process of creation. 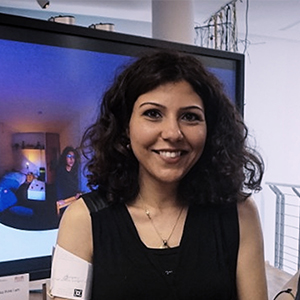 Safaa Mahmoud and Diego Arandia are two filmmakers and media students who under the concept of @ShoesforBrains produce Fulldome 360° Videos and VR projects. During the Jena Fulldome festival in 2019, Safaa and Diego were recognized for their work “Not a nightmare”, and later that same year in Dieburg, Safaa got the first price for her 360° video production “I am not who you think I am “ in the frame of the IMC master program exhibition “The Digital Self“. 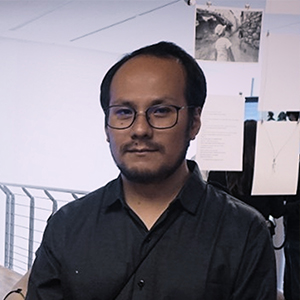 Diego is a master student from the LCI master program at the University of Applied Sciences Darmstadt and worked along with Safaa on the 360° video project The Introvert Simulator. “This project is inspired in our own experience of how it feels to be an introverted person in society. The feelings of anxiety, anguish and isolation are the ones we tried to frame in our project”, explains Diego.

Wir verwenden Cookies, um Ihnen die bestmögliche Nutzung unserer Webseite zu ermöglichen. Wenn Sie die Webseite weiterhin verwenden, gehen wir von Ihrem Einverständnis aus. // We use cookies to ensure that we give you the best experience on our website. If you continue to use this site we will assume that you are happy with it.Ja // YesNein // NoDatenschutzerklärung // Privacy policy